Restless legs syndrome, or Willis-Ekbom disease, is a sleep, movement, and neurological disorder of the central nervous system. It’s characterized by uncomfortable sensations in the legs resulting in an overwhelming urge to move with immediate relief of discomfort upon moving.

RLS symptoms peak at night time which makes sleep or relaxation impossible and leads to chronic daytime exhaustion. It’s a complex and not yet fully understood disorder which can make it tough to navigate as both a patient and a medical provider.

RLS can be confused with many other conditions, especially periodic limb movements, because symptoms of struggling to sleep or feeling restless are common and could match many diagnoses. This is especially hard if the patient is a child or someone who has a harder time explaining their symptoms clearly.

To minimize misdiagnoses and make up for the fact there’s no way to physically test for the syndrome doctors came up with five basic criteria for diagnoses: 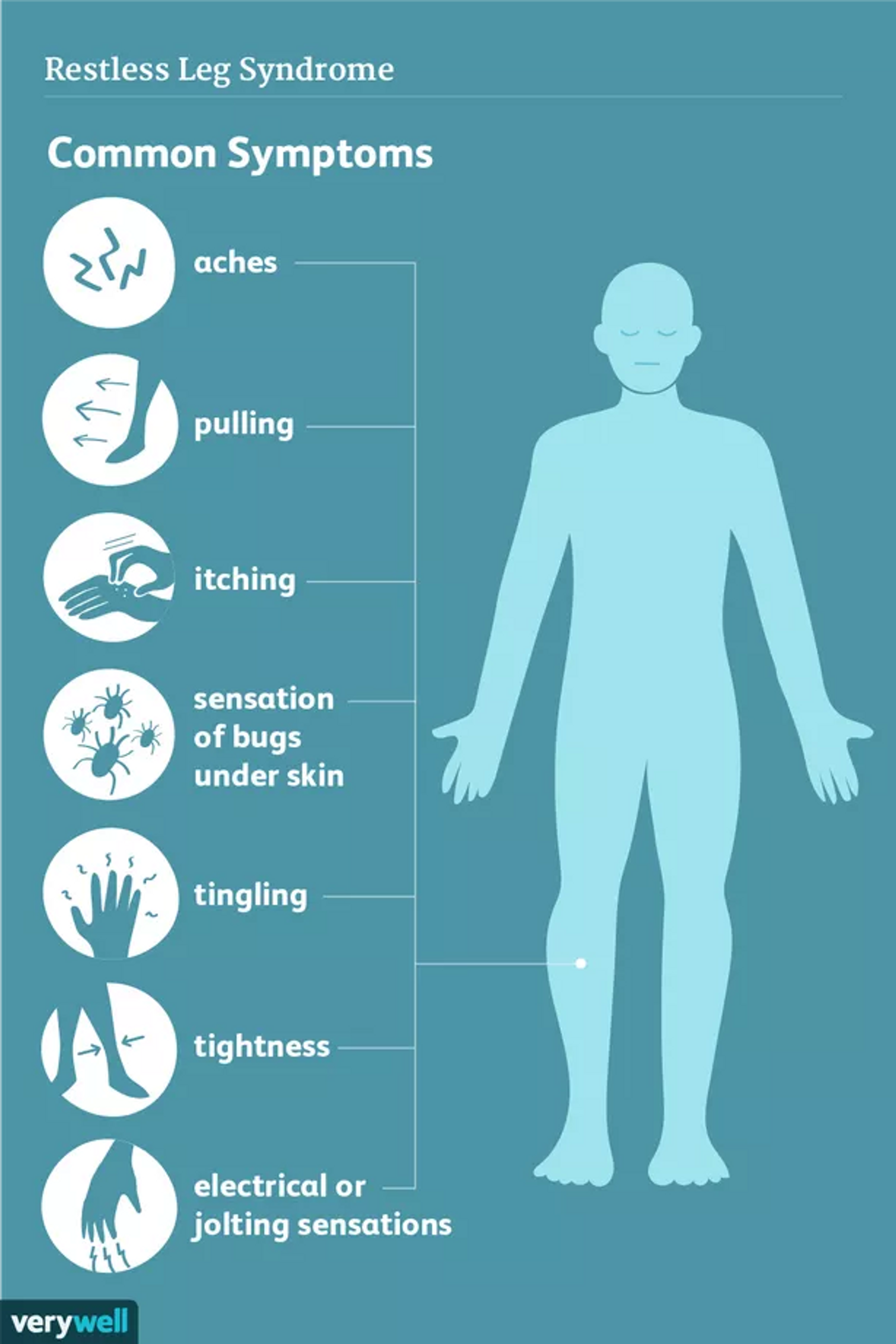 The key criteria for diagnoses is the discomfort is relieved immediately upon movement and symptoms are worse at night as it is a circadian dictated syndrome.

The severity of the condition ranges; those with mild cases report manageable symptoms one or two times a month and may not need treatment while others with more severe RLS report it substantially affects their lives by experiencing symptoms every night. This leads to exhaustion, poor concentration, decreased work performance, and impaired memory, to name a few [2].

No matter the intensity of RLS symptoms, all types are frustrating and can interfere with normal daily activity, like getting a good night’s rest or being able to focus in a work meeting.

Who is Affected by Restless Legs Syndrome?

Primary RLS means the only medical condition you are diagnosed with is RLS. Majority of these cases are genetic and can be passed down from family members. A general rule of thumb is if symptoms start before the age of 20 it's likely there is a genetic component at work.

The specifics of how the genetic component operate is unclear. There isn’t just one gene that carries an RLS trait that flips it on and off like a light switch. Rather it’s a complex interaction of several genes under specific environmental conditions; further research on this topic is required.

Secondary is more common and occurs because of the presence of another condition, which is why it is referred to as “symptomatic RLS”. It is commonly found in patients suffering with end-stage renal disease, iron deficiency anemia, diabetes, high blood pressure, neuropathy, and most commonly Parkinson’s disease.

It can also be triggered by caffeine, nicotine, alcohol, or even certain medications like antidepressants or antihistamines but typically goes away with cessation of their use. It also is correlated with pregnancy with about 20% of pregnant women in their third trimester reporting RLS symptoms. The link between RLS and pregnancy is not well defined, but the most common hypotheses are changes in levels of iron and folate due to the baby tapping into those stores.

There is no cookie cutter answer for the cause of RLS. Like many things in the science world, it is a complex puzzle of multiple factors and depends on the genes, lifestyle, and biochemical individuality of each person. Three of the most common found causes are vitamin and mineral deficiencies, low brain levels of dopamine, and genetics.

Arguably the clearest factor in the murky and much-to-be-learned water surrounding RLS is the prevalence of iron deficiency.

It’s important to note that iron is a co-factor of dopamine synthesis and transports dopamine into the brain so adequate levels of iron are essential for proper functioning. RLS is seen more frequently in people with low iron levels: those with anemia, pregnant women, even frequent blood donors.

Additionally, any kind of inflammation in the body, which occurs in a large amount of diseases and illnesses, can decrease iron absorption as pro-inflammatory cytokines, the cells that up-regulate inflammation, cause an increased production of hepcidin, a protein that slows down iron absorption [7].

Another interesting aspect scientists have looked at is not only the amount of dietary iron taken in but how your brain cells absorb it.

When comparing the brains of those with RLS to brains of people without it, there are decreased activity levels of an iron regulatory protein at the blood-brain interface site. This means that a lab test could come back with iron levels within a normal range but the brain isn’t absorbing the iron well. There is limited data on this topic and it’ll be interesting to see what future research uncovers and how brain absorption of iron can be increased.

Another compound that has gained attention in RLS studies is magnesium. Magnesium is a mineral that supports healthy muscle and nerve function in our bodies and has also been shown to decrease symptoms of RLS. It plays an important role in helping muscles relax due to its ability to block calcium. Without adequate amounts of magnesium in the blood, calcium levels can rise and cause muscle contractions.

A study testing the effects of magnesium on RLS found taking magnesium supplementation improved insomnia and helped patients get a more restful night of sleep [4].

Vitamin D can also help improve symptoms of RLS. It’s a vital compound that is well known for helping keep our bones strong but has many other important roles, like supporting immune function, heart and muscles, and facilitating neurotransmitter synthesis and nerve growth [8].

In the case of RLS, it’s an important part of the conversation because of its involvement in dopamine function. Adequate levels of Vitamin D are shown to increase dopamine levels significantly and is “essential for the normal development of dopaminergic neurons” [5,8].

Vitamin D deficiency can be fixed by spending a little more time in the sunshine or with vitamin D supplementation.

Folate, or folic acid, is a B vitamin that supports healthy cell growth and the formation of red blood cells. It’s extremely important for pregnant women or anyone trying to get pregnant as it can prevents defects in the baby’s brain and spine during development. Folate supplementation has also been linked to improving RLS symptoms [13].

The second most common found cause of RLS is low levels of dopamine. Dopamine is a neurotransmitter produced in the brain that is essential for us to live. Not only does it act as a chemical messenger between neurons but is involved in blood flow, digestion, organ function, sleep, stress response, mood, emotion regulation, motor control, and much more [7].

We have dopamine to thank for helping us produce smooth, purposeful movements.

Involuntary movements, like those occurring in Parkinson’s disease, are due to the disruption of proper neurotransmitter signaling in the brain [2]. Findings are similar in RLS, with multiple studies pointing to abnormalities in dopamine signaling in the brain’s basal ganglia, the part of the brain responsible for motor control. This system in the brain can become overactive in RLS and may produce the need to move when trying to rest and the inability to maintain sleep [2].

Like many diseases, RLS has a genetic component. About 50% of affected individuals can identify a parent or sibling who also has it [11]. As previously mentioned, the specifics of the gene variations are unknown at this time.

We do know RLS exhibits “genetic anticipation”, which means the symptoms of the genetic disorder start at an earlier age as it continues to get passed down to the next generation and severity of symptoms also increases [11]. RLS patients who develop the condition early on in life are likely to have the gene for it.

What can relieve symptoms?

Fortunately, there are several (relatively) easy things you can do to ease RLS symptoms.

Most importantly, ensure you are getting proper amounts of vitamins and minerals in your diet, especially iron.

At the grocery store, try switching up what produce you buy to ensure you’re eating different vitamins and minerals each week. A simpler solution can be incorporating vitamin (especially iron) supplements into your daily routine to give your body everything it needs in one step. It’s important to find a high-quality vitamin supplement by a science-backed, reputable company like Rootine to improve vitamin and mineral levels.

The sleep medicine podcast “White Noise” had Dr. Andy Berkowski, a restless leg doctor at the University of Michigan, on to talk all things RLS. Dr. Berkowski shared that iron therapy is key to treat RLS and the first thing he does is recommend an iron supplement to his patients before trying any other medication. Upon iron supplementation, many patients will be relieved of symptoms and require no further treatment.

For RLS patients that still have problems after adequate iron supplementation, the pharmaceutical alpha-2-delta-ligands is the next best step, according to Dr. Berkowski. He talked on the podcast about how he sees many patients whose healthcare provider will skip iron supplementation and go straight to prescribing dopaminergic medications, which increases levels of dopamine in the brain. In his clinical experience, this can actually worsen symptoms in the long run because you have to frequently increase the dosage of the dopamine agonists or else symptoms will worsen (also known as augmentation).

Moderate exercise has also been shown to relieve RLS symptoms. Going for a walk, on a short run, or doing any workout you enjoy for about 30 to 45 minutes can help you feel more tired at night. Aim for a workout in the morning or mid-day for best results as exercising in the evenings or at night can worsen RLS symptoms.

Since RLS is a circadian (the body’s internal clock) disorder, going to bed and waking up at the same time each day can help. Going outside in the morning for as little as two minutes has been shown to reset the body’s circadian clock.

It’s also equally as important to decrease light exposure for two hours prior to bedtime as that’s when the body is most sensitive to light. Light exposure at night can decrease the body’s production of melatonin and make you feel less tired. Turning off screens and bright lights are small changes you can make to help your brain know it’s time to go to sleep.

RLS can be tough to navigate as much of the research out there is needs further testing.

Here are a few things to remember to make it a little easier: